Most Republicans, however, tried to walk a fine line on Trump, who is deeply unpopular in New York. New York Republicans have said they would support some of his measures, such as those that spur the economy, while distancing themselves form Trump’s heated rhetoric.

“I look forward to working together to protect suburban homeowners and finally pass good-government reforms that have been stalled for far too long,” Bellone said.

Democrats controlled the Senate only twice: In 1965 until Republicans won a special election months later; and in 2008, when Democrats won 32 seats in what was then a 62-seat chamber. Republicans scored a net gain of two seats in 2010, giving them a 32-seat majority plus a conservative Democrat who allied with them. GOP rule was further solidified in 2010 when four Democrats broke away from the Democratic majority to form the Independent Democratic Conference, which allied with the Republican majority and Democratic Gov. Andrew M. Cuomo to get some progressive measures to the floor. It dissolved in April under pressure within the party. END_OF_DOCUMENT_TOKEN_TO_BE_REPLACED

With all precincts reporting, East Hampton businessman Perry Gershon had 36 percent of the vote to 30 percent for former Suffolk Legis. Kate Browning, who called Gershon late last night to congratulate him.

Three other challengers had 34 percent of the vote combined. 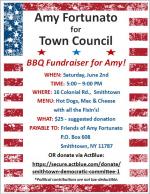 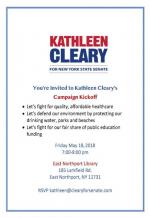 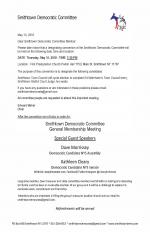 Please take notice that a designating convention of the Smithtown Democratic Committee will be held on the following date, time and location:

If you have any questions or are interested in these positions please email: smithtowndemocrats@gmail.com.

All committee people are requested to attend this important meeting.

After the convention we will stay in order... END_OF_DOCUMENT_TOKEN_TO_BE_REPLACED