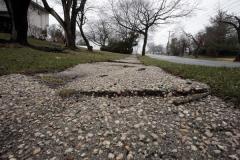 Dec
11
2015
Lifted portions of a sidewalk on Scholar Lane looking toward the corner of Shaker Ridge Lane on on Friday, April 10, 2015 in the Town of Smithtown. (Credit: Joseph D. Sullivan)

Smithtown Town Board members awarded millions of dollars in public contracts for concrete work to one of its largest vendors even after frustrated town employees had rebuked the company for missing multiple deadlines that delayed the town’s annual road and sidewalk repair program, records show.

Over the last two years, the town’s board members voted unanimously to award contracts worth more than $2.4 million to St. James-based Jadeco Construction Corp. for sidewalk and curb repairs. Those votes came after town highway department workers had to perform jobs that Jadeco had been contracted to do and after Jadeco had been warned the company’s “constant lethargic approach to work and unacceptable performance” could lead to daily fines of up to $2,500, records show.

Three of the five town board members agreed to be interviewed for this story, including longtime Smithtown Supervisor Patrick Vecchio. They said they were unaware of the problems with Jadeco when they cast their votes and had never seen the town documents detailing some of those issues until a Newsday reporter presented them during recent interviews. (Vecchio was absent when the board voted in 2015 to award Jadeco’s latest contract).

Vecchio blamed the board’s lack of knowledge on former Highway Superintendent Glenn Jorgensen, who in October resigned and pleaded guilty to felony and misdemeanor charges for filing false records in a case involving another contractor, Medford-based Suffolk Asphalt Corp. Jorgensen, who declined to comment for this story, is scheduled to be sentenced Friday in state Supreme Court.

“If the contractor is not performing for the highway superintendent, who’s a separately elected official, then it’s his responsibility to deal with that,” Vecchio said. “I, and the board, don’t know about those problems with the contractor.”

Jadeco’s president, Jacinto “Jesse” DeAlmeida, declined to comment for this story, citing an ongoing lawsuit against the town.

Newsday examined hundreds of town records for this story, including internal memos, legal documents, internal investigative reports, correspondence, payment vouchers and highway department work logs and orders. The documents show that there was widespread knowledge among several of the town’s top department officials when it came to the problems with Jadeco.

Yet board members — who set the highway department’s budget and can vote to approve its contracts — say those concerns never reached them, raising questions about the town’s contracting process and whether the spending of tax dollars has been adequately monitored....