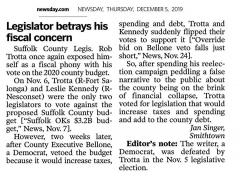 Suffolk County Legis. Rob Trotta once again exposed himself as a fiscal phony with his vote on the 2020 county budget.

On Nov. 6, Trotta (R-Fort Salonga) and Leslie Kennedy (R-Nesconset) were the only two legislators to vote against the proposed Suffolk County budget [“Suffolk OKs $3.2B budget,” News, Nov. 7].

However, two weeks later, after County Executive Bellone, a Democrat, vetoed the budget because it would increase taxes, spending and debt, Trotta and Kennedy suddenly flipped their votes to support it [“Override bid on Bellone veto falls just short,” News, Nov. 24].

So, after spending his reelection campaign peddling a false narrative to the public about the county being on the brink of financial collapse, Trotta voted for legislation that would increase taxes and spending and add to the county debt.

Editor’s note: The writer, a Democrat, was defeated by Trotta in the Nov. 5 legislative election.