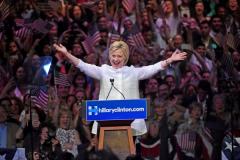 “Thanks to you, we have reached a milestone — the first time in our nation’s history a woman will be a major party candidate,” she told supporters at the Brooklyn Navy Yard.

“Tonight’s history is not about one person, it belongs to generations,” she added.

Clinton reached out to Democratic Sen. Bernie Sanders, her dogged opponent, thanking him for a hard-fought campaign and saying it had brought about “vigorous debate” that was good for the Democratic Party and the country.

But she and Sanders were still battling overnight in the delegate-rich California primary in what was expected to be a close contest. Early returns, however, had Clinton was leading — in some precincts by a large margin.

In her remarks in Brooklyn, Clinton stressed the need for unity, saying: “We believe we are stronger together.”

Then she went on the attack.

“Donald Trump is temperamentally unfit to be president,” she said of the presumptive Republican nominee. “ . . . He is trying to wall off Americans from each other.”

“We want an America where everyone is treated with respect,” Clinton said. “It’s clear Donald Trump doesn’t believe we are stronger together. . . . He wants to win by stoking fear and rubbing salt in wounds, and reminding us daily just how great he is.

“Well, we believe we should lift each other up, not tear each other down,” she said.

“I wish she could see her daughter becomes the Democratic Party’s nominee,” she said to loud cheers.

“Barriers can come down,” she said.

Trump earlier spoke to supporters at his country club in Briarcliff Manor. Saying he would bring about “real change, not [Barack] Obama change,” Trump painted himself as an outsider who won because voters are tired of politics as usual.

“Why would politicians want to change a system that’s totally rigged to keep them in power?” he said. “I beat a rigged system by winning with overwhelming support.”

Trump said Clinton and her husband, former President Bill Clinton, “had turned the politics of personal enrichment into an art form for themselves.” He accused them of “selling access” and government contracts in order to enrich themselves and suggested Clinton used a private home-brew email server to hide it.

“The last thing we need is Hillary Clinton in the White House and an extension of the Obama disaster,” he said to applause.

“Better hope I’m president,” he joked, pledging to be “America’s champion” and saying Clinton and her husband were responsible for a litany of foreign policy ills and bad trade deals.

He promised to give a “major speech” next week in which he will outline his attacks on the Clintons.

Voters in New Jersey kicked off coast-to-coast Democratic contests in six states, wrapping up in California.

Clinton won New Jersey easily, then went on to be the projected winner in New Mexico and South Dakota.

Even as Clinton looks ahead to the expected showdown with Trump, she also must work to bring aboard Sanders’ legions of backers, including many young voters who could be an important bloc in the run against Trump.

Before Tuesday’s primaries, Clinton had claimed exactly the number of delegates needed to secure victory, according a tally by The Associated Press on Monday, by picking up commitments from superdelegates over the weekend.

With that milestone, the former first lady, U.S. senator and secretary of state ended more than two centuries of national history in which only men have been the standard-bearers for the major political parties.

She also overcame her crushing loss to Obama in the 2008 Democratic primaries, as well as a political environment this year that favored outsiders at the expense of her establishment credentials. And she became the first spouse of a former president to win a presidential nomination.

As a sign of the Democratic Party’s effort to close ranks around Clinton, House Minority Leader Nancy Pelosi announced her support Tuesday just before polls opened in her home state, California.

Clinton had already secured the 2,383 delegates she needed for the nomination on the eve of Tuesday’s voting, according to an Associated Press tally. Her total is composed of pledged delegates won in primaries and caucuses, as well as superdelegates — the party officials and officeholders who can back a candidate of their choosing.

Clinton wasted no time moving toward the general election. Her campaign announced that she would make stops next week in Ohio and Pennsylvania, states that will be pivotal in November.

Sanders spent Tuesday making a final round of campaign stops in California, the biggest prize of the day. The Vermont senator hoped a victory would help in his so-far-unsuccessful bid to get Clinton superdelegates to switch their support.

Heading into Tuesday’s voting, Clinton had 1,812 pledged delegates and the support of 571 of the 714 superdelegates, according to the AP count. The final Democratic primary will be held next week in the District of Columbia.

Trump, after vanquishing his last opponents about a month ago, has continued to make controversial statements, frustrating party leaders. The latest cause for GOP concern was his insistence that a judge handling a legal case involving the businessman was being unfair in his rulings.

Trump has said U.S. District Judge Gonzalo Curiel can’t be impartial because the jurist’s parents were born in Mexico and Trump wants to build a wall along the border.

Illinois Sen. Mark Kirk, who is locked in a close re-election fight, became the first lawmaker to pull his endorsement of Trump. House Speaker Paul Ryan said the businessman’s assertion was the “textbook definition of a racist comment,” but he would continue to support Trump.