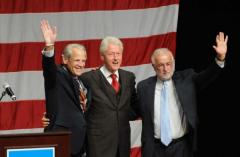 "If you want to send a message to Washington . . . you've got to vote for Tim Bishop," Clinton said during a 35-minute speech Wednesday night sponsored by college Democrats in the university's Staller Center.

Clinton, who flew in from Michigan, said Bishop deserves re-election because he backs a progressive agenda, including a higher minimum wage, equal pay for equal work and lowering the burden of debt on college students.

"This whole election will determine whether we will grow together or grow apart," Clinton said. "America is coming back, but you are going to decide the terms and whether we are going to come back together."

It is the second time that Clinton has helped the Southampton Democrat in a tight election. In 2010, Clinton also spoke at a university rally when Bishop won by a narrow 597 votes over millionaire Randy Altschuler, a former co-owner of OfficeTiger, which outsources business service jobs.

Clinton said the issues Bishop backs are supported by a majority of voters, but he faces a close race because many people fail to cast ballots in off-year elections. "Every single one of you will pass 100 people who will not vote unless you say something to them," Clinton said.

Laura Doukas, president of the college Republicans club, said the university issued tickets for the event, which was billed as a get-out-the-vote rally, though it only promoted one candidate.

"Calling it a get-out-the-vote rally was very misleading and inappropriate," Doukas said. "It really infuriated me and we are not getting answers from the college."

Bishop praised Clinton's record in which the president balanced the budget, kept inflation low and created the country's longest peacetime economic expansion. He also asked the college crowd to repeat its performance in past elections with lines snaking around the building housing the campus polling place. "When I come back Nov. 4, I want to see the same lines because I know there will be a ton of Bishop votes," he said.

Jennifer DiSiena, Zeldin spokeswoman, downplayed the impact of the rally: "Blind loyalty to the Obama-Pelosi agenda has its perks. Millions of dishonest attack ads alone aren't enough to prop up Nancy Pelosi's favorite back bencher. After 12 years, voters in the 1st Congressional District are deciding it is time to term limit Tim."